Tens of thousands of Australian teenagers are gaming at pathological levels, which in extreme cases is leading to prolonged school refusal, threats of self-harm and aggression towards family members.

A new study has found those most vulnerable to developing internet gaming disorder (IGD) not only struggled with their impulses but also felt unsupported or disconnected from their families and disempowered in their outside environment.

The Macquarie University researchers also looked at case studies, such as the 13-year-old who missed almost a year’s worth of school, waking up at midnight to game without his parents’ knowledge, and the primary school-aged students displaying gaming-related aggression.

However, the researchers also said the behavioural addiction could be addressed by targeting the students’ risk factors, such as building students’ conﬁdence and tackling the relationship issues leading to their social isolation.

As part of the study, the researchers surveyed almost 900 students from years 7 to 10 at a socially advantaged co-ed Australian high school. Some 24 met the criteria for IGD; 15 of them were male and nine were female.

That rate of 2.8 per cent was consistent with other studies, and, in the context of Australia’s teen population, equates to tens of thousands of young people. 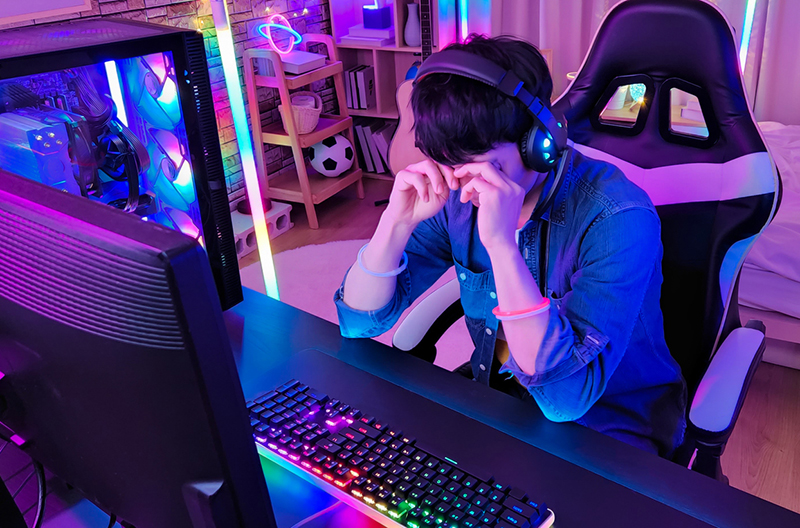 Associate Professor Wayne Warburton, who led the study, said the likelihood of a teen having a clinical problem with gaming grew with their risk factors, which included being male, having low self-esteem and feeling socially isolated.

“Feeling you don’t have much control over your environment,” he said. “Feeling you were not good at many things. Feeling you had poor attachment with your parents.”

But the risk fell when students had higher self-esteem, were socially connected, and had a stronger bond with their parents and a warm family environment. “Once you had six protective factors, you virtually had no risk,” he said.

“What that means clinically is you can turn some of those risk factors around ... if you take a kid who’s feeling socially isolated and you work with them on communications skills and making friends if you help them develop a bunch of skills online.”

Warburton and his colleagues also did an in-depth examination of six young people with IGD, including two at primary school. Five became highly aggressive when their parents tried to take their games away, and three had apprehended violence orders against them.

The 13-year-old, dubbed Adam, was taken to hospital after he threatened to self-harm during an argument about limiting screens. He woke up in the middle of the night to hide his gaming, gambling and emotional eating, and attended school less than half the time over two years.

An 11-year-old stole his grandmother’s credit card to purchase items within Fortnite, damaged walls during his rages and would threaten self-harm when limits were put on his screen use.

“At the extreme end, you see kids who are locked in their room, who rarely come out and are not getting any schooling,” Warburton said. “They often start to develop anxiety and depression, they get afraid to come out of their room and face the real world.”

Warburton and his colleagues are recruiting teens for a program to run on the Central Coast in October. A similar program in Germany, which looked at brain function before and after the program, found signiﬁcant beneﬁts.

Jocelyn Brewer, a child psychologist who runs Digital Nutrition, a program promoting healthy technology use, said teens who used technology in ways that interfered with their normal functioning did so because it gave them something they were missing in real life.

“Connection; you get to ﬁnd your tribe and hang out with people,” she said. “Competence; you’re good at gaming in a way you aren’t good at maths. And control; around what game you play, what avatar you use, control of your environment.”

Brewer said time spent on screens was not necessarily an indicator of problem gaming use, especially if the young person was still keeping their grades up, doing their homework, engaging in friendships and playing sport.

“We need to look at what is the content of those games, if you’ve got a 12-year-old playing R-rated games, that has a really different impact to more developmentally appropriate or more pro-social games,” she said.